I learned several things in the process of writing ‘Bunco’. I’ll try to generate a series of posts focussing on the main lessons.

This one will be about the relative weight of some of the various elements mentioned in this graphic by Christopher LaPorte on his extraordinarily beautiful website.

I’ll touch on grammar in another posting, along with editing. 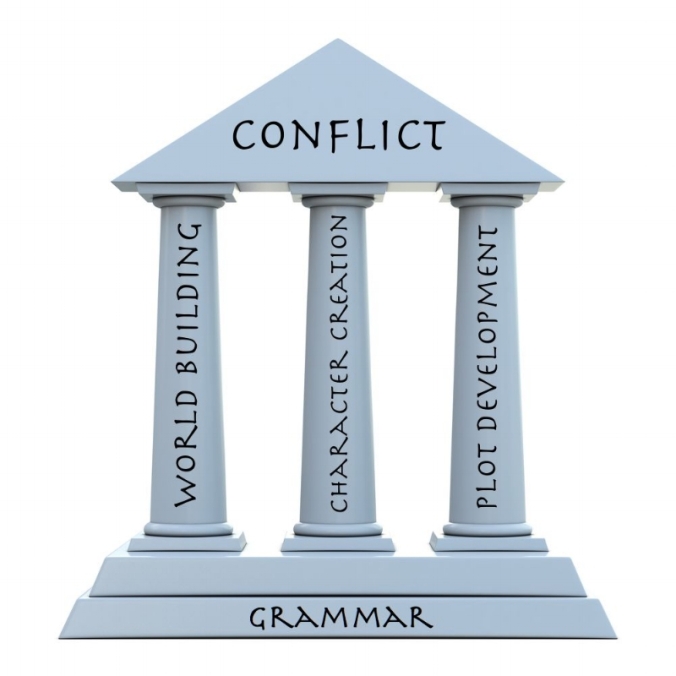 However, my thought for today is about character v plot. I think ‘Bunco’ is strong on plot and what Chris calls World Building – creating a sense of time and place. And while I think my characters are engaging, they are not complex. I think creating, developing (in the story) and sustaining subtle, complicated characters is what defines ‘literary’ novels, as opposed to airport, ‘commercial’, novels.

When I set out to write ‘Bunco’; apart from Stephen King’s ‘On Writing’, I reread a couple of Grisham books and for some reason, I picked up a book by a writer I had never read, Maeve Binchy. The novel was called ‘Evening Class’, and I realized that the entire cast of characters (10+ as I recall) were all stereotypes – the dumb blonde, the striving mechanic, the well-meaning teacher undervalued by his cheating wife etc., etc. This was very liberating. Although I had never read a Binchy book, I was aware of her – 40 million books in 37 languages. And yet, her Wikipedia profile suggests that she was ‘best known for her sympathetic and often humorous portrayal of small-town life in Ireland, her descriptive characters, her interest in human nature, and her often clever surprise endings.’

So while a well-drawn character will live with you forever, there are lots of best-selling books out there that are fun, captivating – but with utterly unmemorable characters. Unless you are, say, Charles Dickens – who manages to be brilliant at everything – I think there will be a trade-off between character and plot. Is the next page going to be about moving the action forward, or allowing character X to discover/reveal/develop another trait? Of course, you must do both; but mere mortals struggle with consistently developing even one pillar really well – while also painting convincing word pictures of a place and time!

So, I’m thinking we should focus making two out the three pillars really strong and hope they hold up the structure.

In my own case, at least for the foreseeable future, I suspect characters will serve the plot, rather than vice versa.

Welcome, and thanks for visiting. I am an aspiring writer, sharing some of my experience of getting to grips with creative writing. Please take a look around, there are things to read and things to comment upon.
Brian

Musings through the journey of writing my first novel

A daily selection of the best content published on WordPress, collected for you by humans who love to read.

The Art and Craft of Blogging

The latest news on WordPress.com and the WordPress community.